Following on from my first post of images from my Dolomites trip earlier in the year, this post covers images made in the vicinity of Tre Cime.

Tre Cime was a priority location on this trip, so much so that we booked two nights at Rifugio Lavaredo to give us a couple of sunrises/sunsets, allowing us to cover plenty of different locations in the area.  That planning didn’t really pay off though, with both sunrises only giving brief glimpses of light and both sunsets being lost to ever-lowering cloud.  Still, it is a fantastic location with plenty of options to shoot.

Cima Cadin di San Lucano is the highest peak of the Cadini di Misurina mountain group, just south of Tre Cime.  It’s a particularly rugged looking range, with a spiky, almost sawtooth-like, appearance from Tre Cime, and so a range I was keen to photograph. 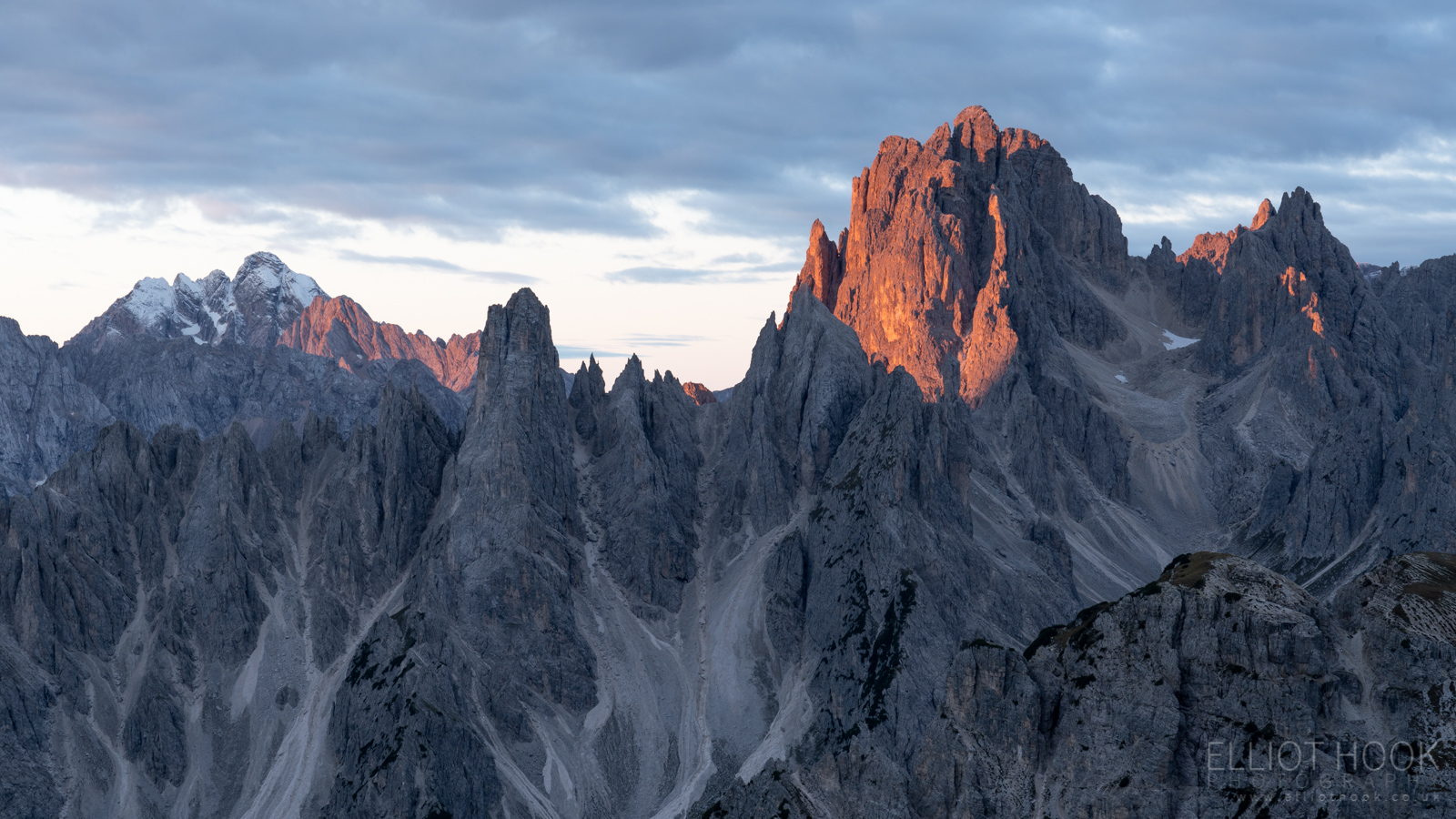 However, I think I prefer this image below, taken during one of the many times that the peaks were almost lost to the low cloud… 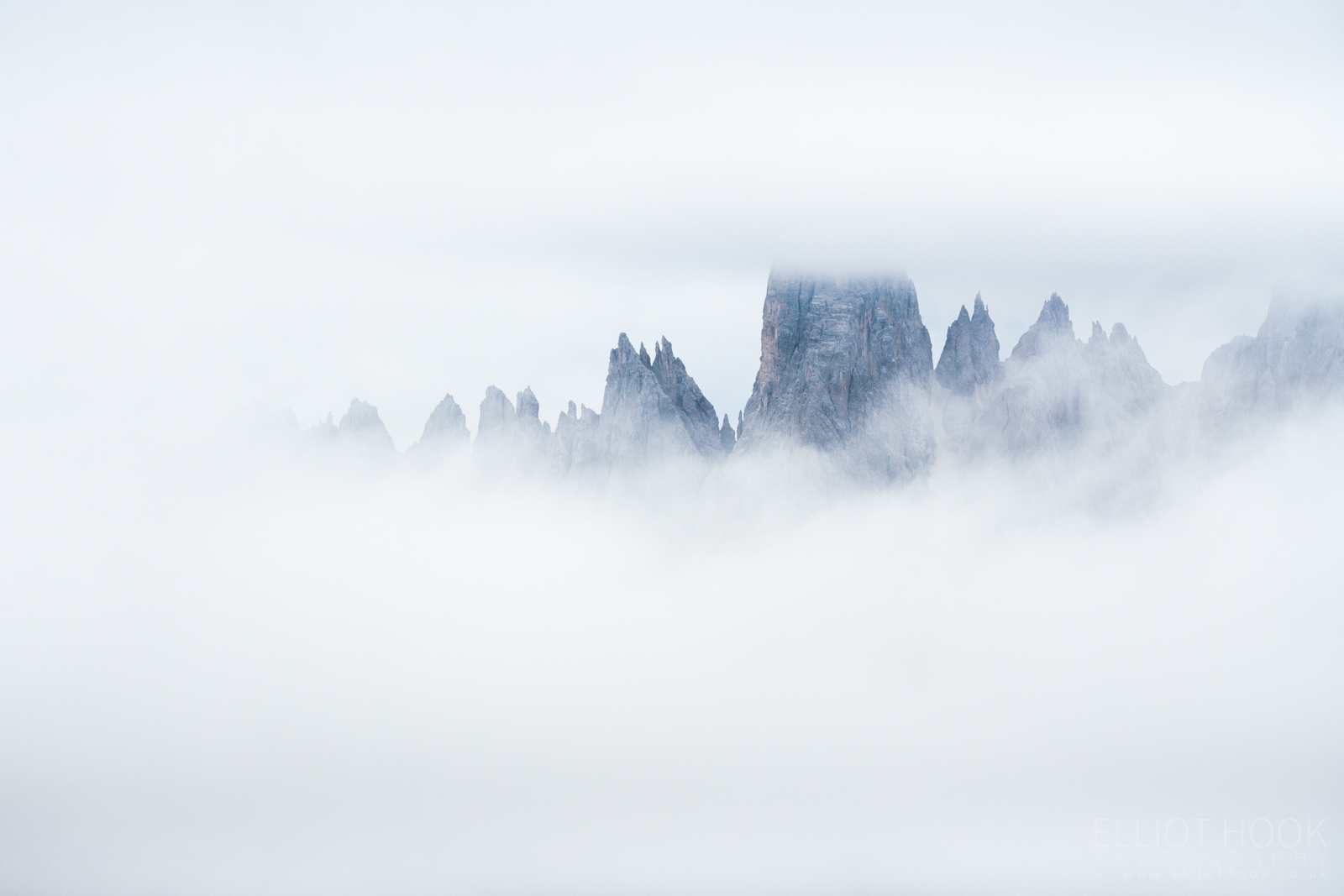 Views into other Valleys

A great thing about being up amongst the mountains like that is when the obvious views/opportunities aren’t working out, there is still often something worth shooting.  And from Tre Cime, there are views down a few valleys, so it can be just a case of waiting for a bit of luck with the light.

The image below was taken looking west during the middle of one afternoon.  I’m a sucker for views like this, looking down a valley with layers of criss-crossing peaks.  I think the small peak in the centre is Croda de r’Ancona (thank you, Peakfinder). 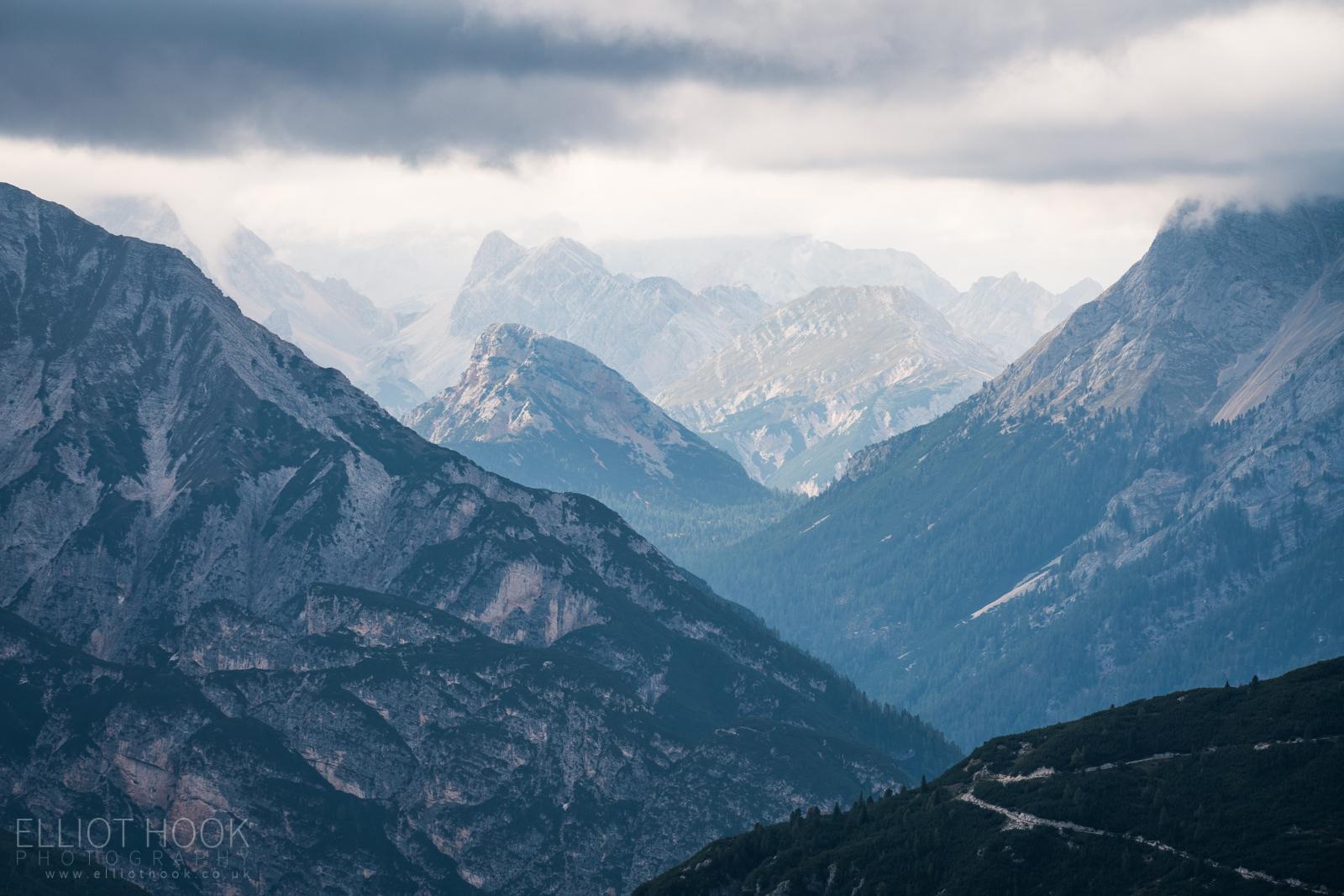 And this next image was taken mid-morning, looking south towards the valley of Auronzo di Cadore, as rolling cloud allowed light to periodically burst through.  Again, just layers of peaks are far as the eye can see. 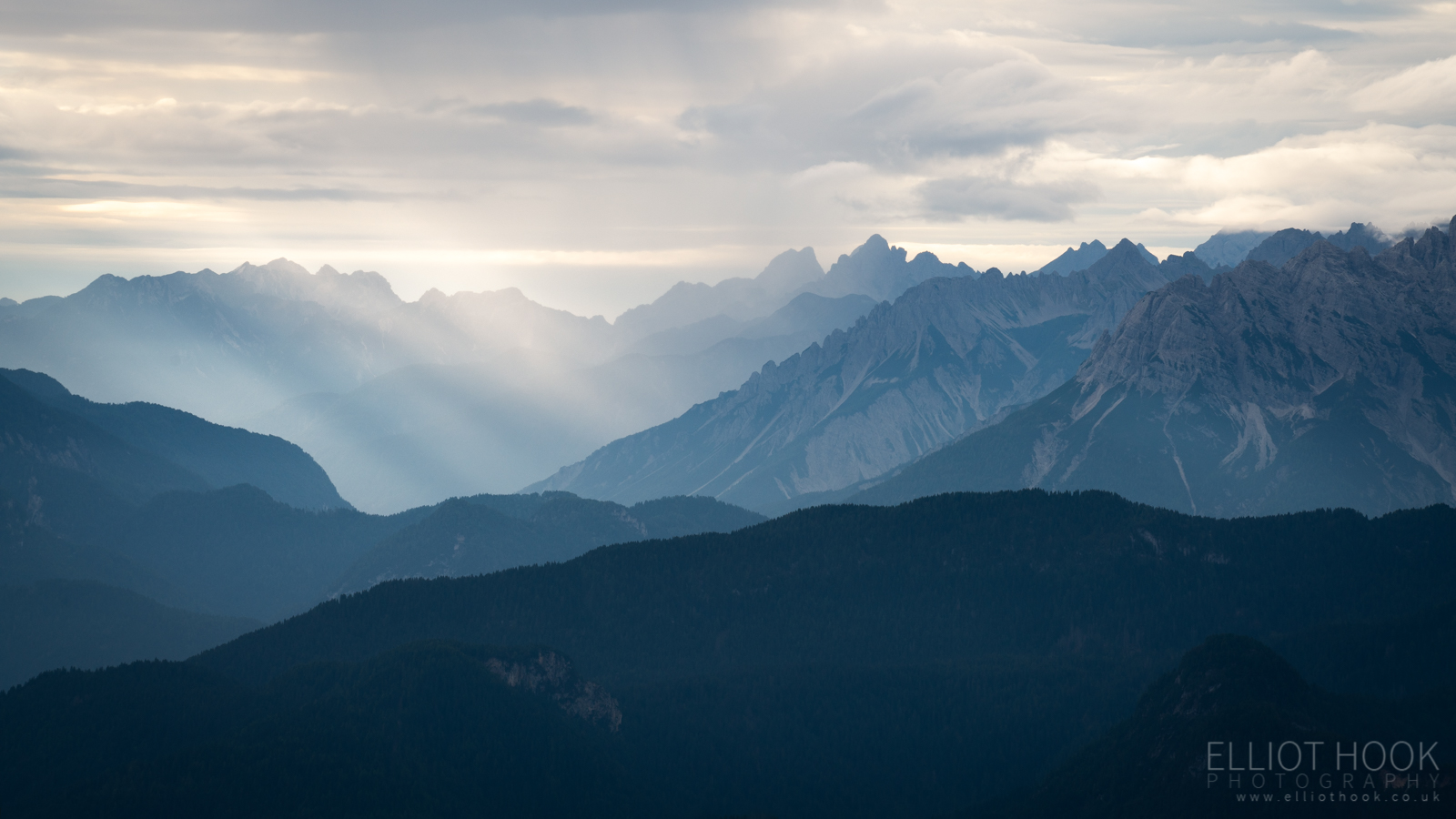 And so, Tre Cime itself.  Unfortunately, I didn’t come back with anything more than record shots of Tre Cime, but that’s just how it goes.  The weather allow did allow for some alternative takes – the image below was taken from the caves near Dreizinnenhütte as rain rolled through, with cloud shrouding the peaks of Tre Cime on the right hand side. 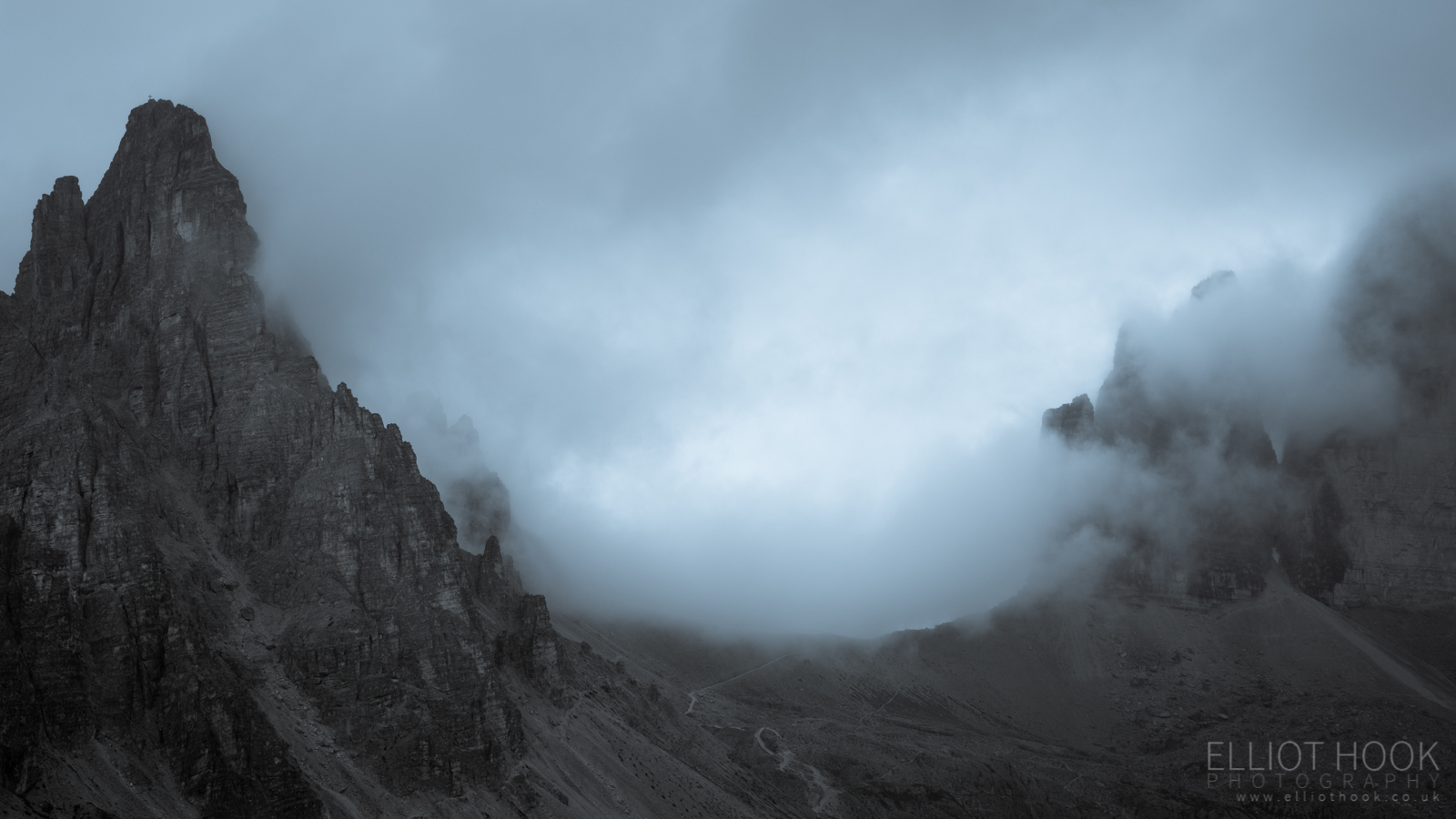 We were lucky enough to watch some climbers taking on the Cima Grande at one point, so it was an opportunity to shoot a climber small-in-the-frame to show the scale of the wall he was facing – I quite liked the different colour rock, splitting the frame in two. 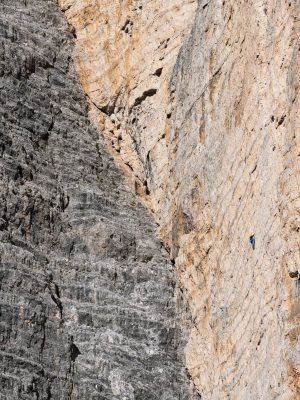 All-in-all, a fairly disappointing selection of images from a location that is so grand, but the flip side is that it forced me to look for less obvious opportunities as well as leaving plenty of scope for a return visit.