This is the third post sharing images taken on a week long trip to the Dolomites in September 2019, and is focussed on Lagazuoi (earlier posts, can be found here (covering Lago Antorno) and here (covering Tre Cime)).

Rifugio Lagazuoi has to win the prize for the most easily accessible rifugio that offers the most incredible views; just a short cable car gets you to a mountain hut with nearly 360° views over some of the finest scenery in the Dolomites, including Croda da Lago, Cinque Torri, Marmolada and Piz Boè.

It was becoming clear, however, that the pattern of cooling afternoons leading to low cloud was going to play out on this day too, and it wasn’t that long after we arrived that we found ourselves in thick cloud with little visibility.  This was frustrating, but it did break a couple of times to give us interesting opportunities to shoot through the cloud… 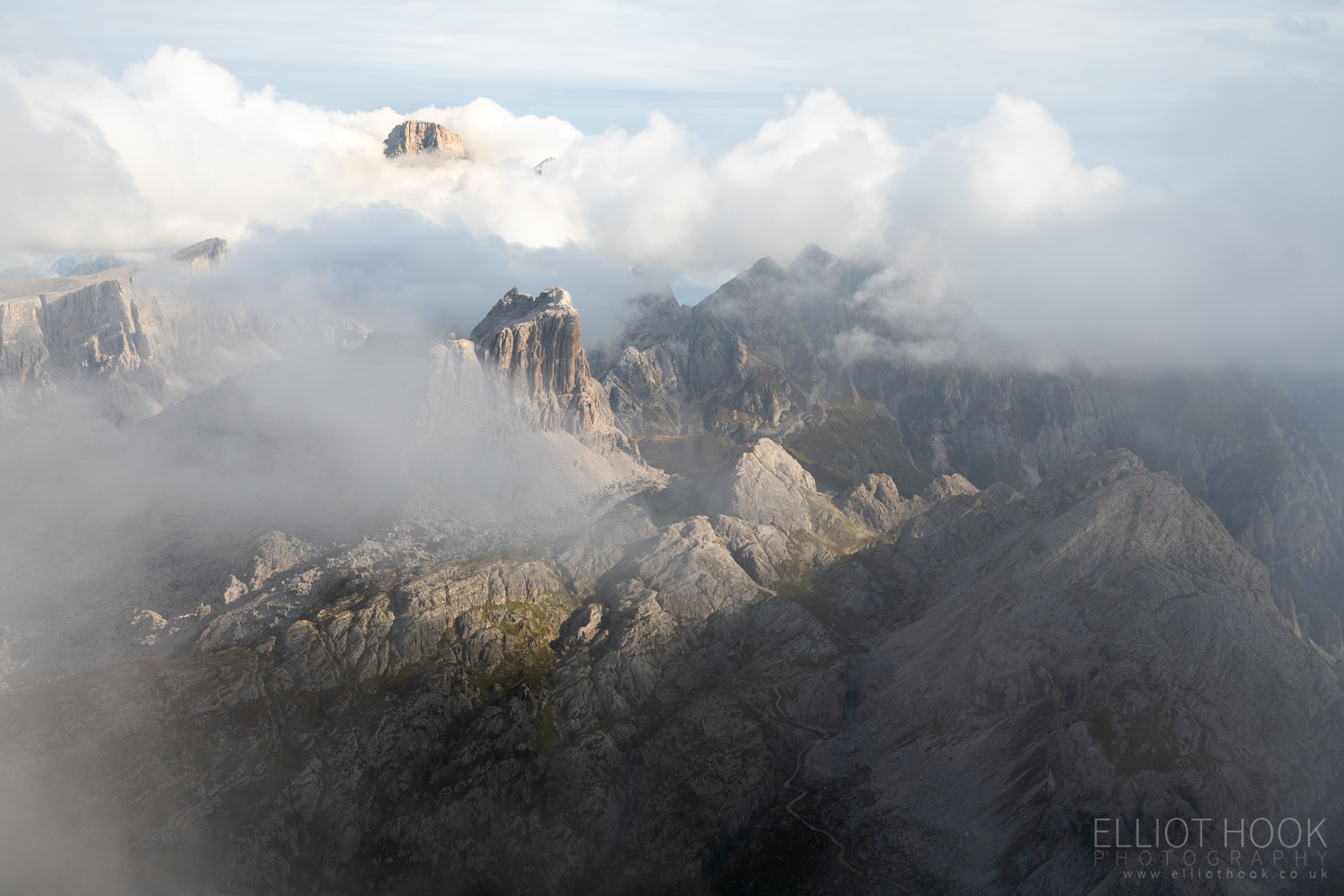 The thick cloud hung around until sunset, just breaking as the sun dropped below the horizon, allowing a frantic 20 minutes of shooting as the light disappeared.  Here is Monte Civetta in the pinky/purple hues of twilight, with a 30s exposure due to the ever decreasing light. 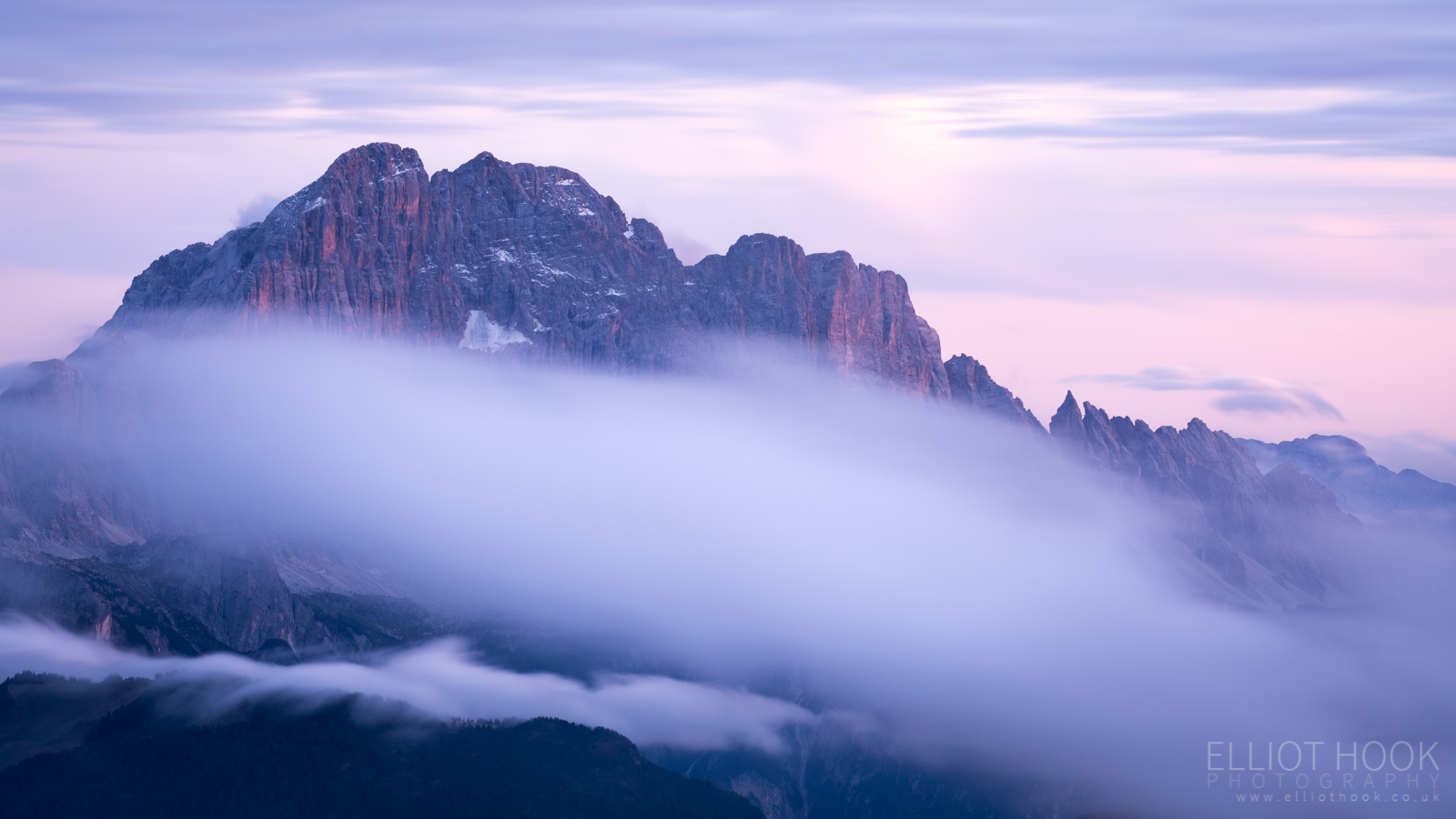 Sunrise was an improvement with clearer skies.  Twilight/pre-sunrise again proved the most successful with lovely pink light hitting the clouds and softly lighting landscape below: 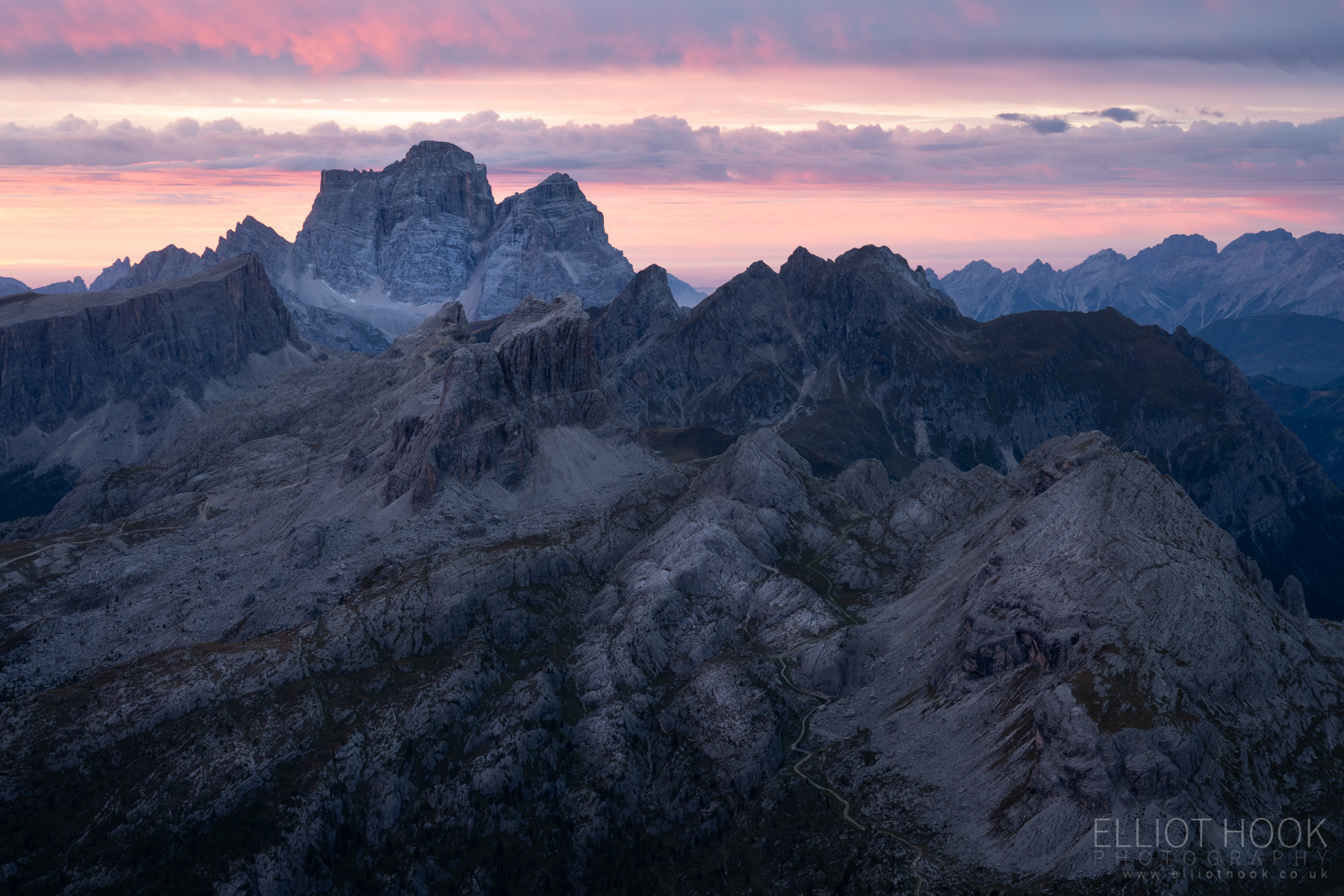 Again, the promise of the build up was not fulfilled as the sun made a brief appearance before rising behind some clouds.  Below is a similar, but wider, composition to the above but with the last glimpse of direct light we saw that morning: 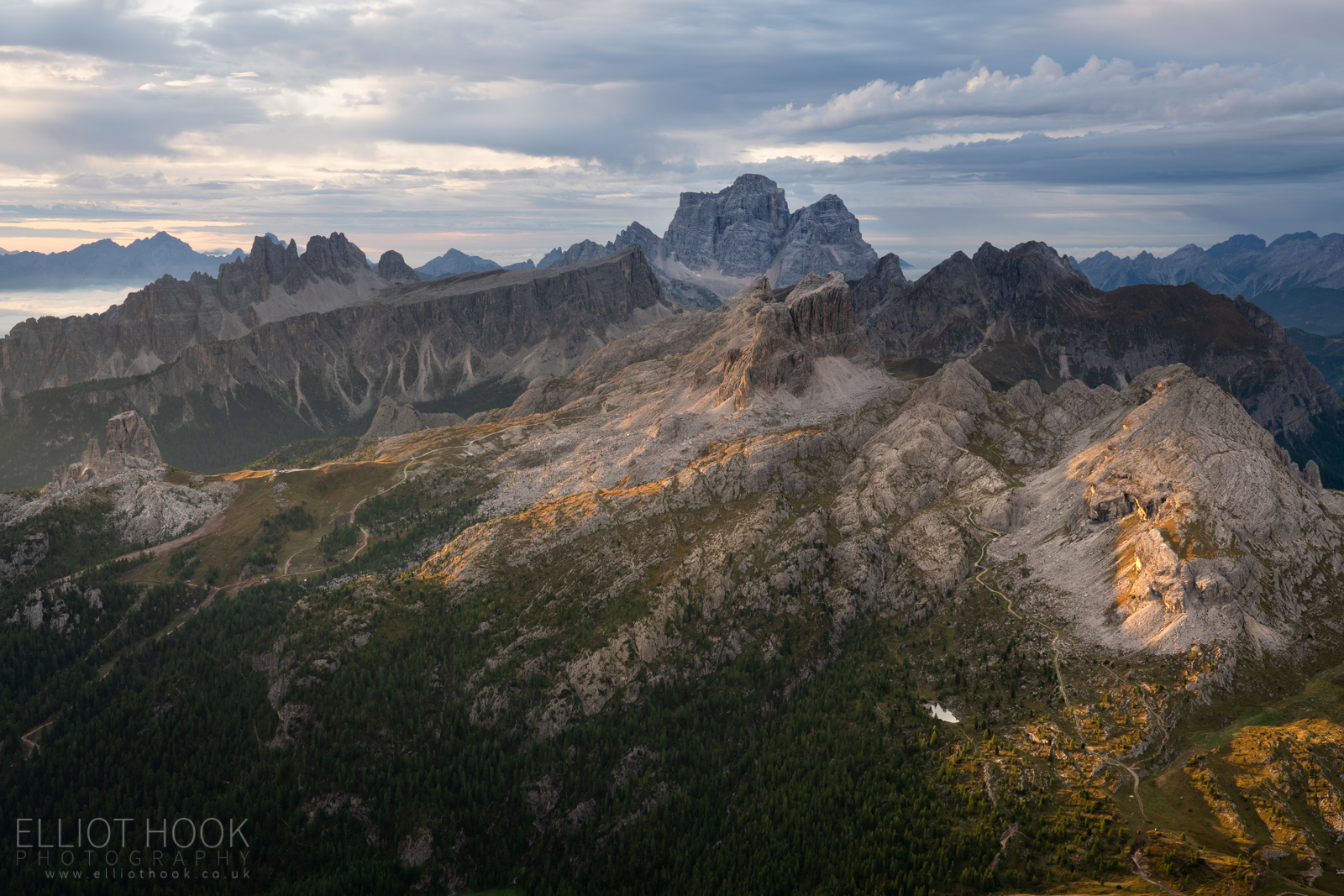 The next image is of Monte Antaleo, a mountain with a distinctive triangluar shape, that was visible to us on a few mornings.  Whilst this view looked great to the eye, it was challenging to photograph due to the disparity in exposure between the sky and the land as the sun rose.  That dynamic range is easily handled by cameras these days, but I wasn’t happy with a number of the resulting images when processed, so I’ve settled on this image from well after sunrise that I found most pleasing. 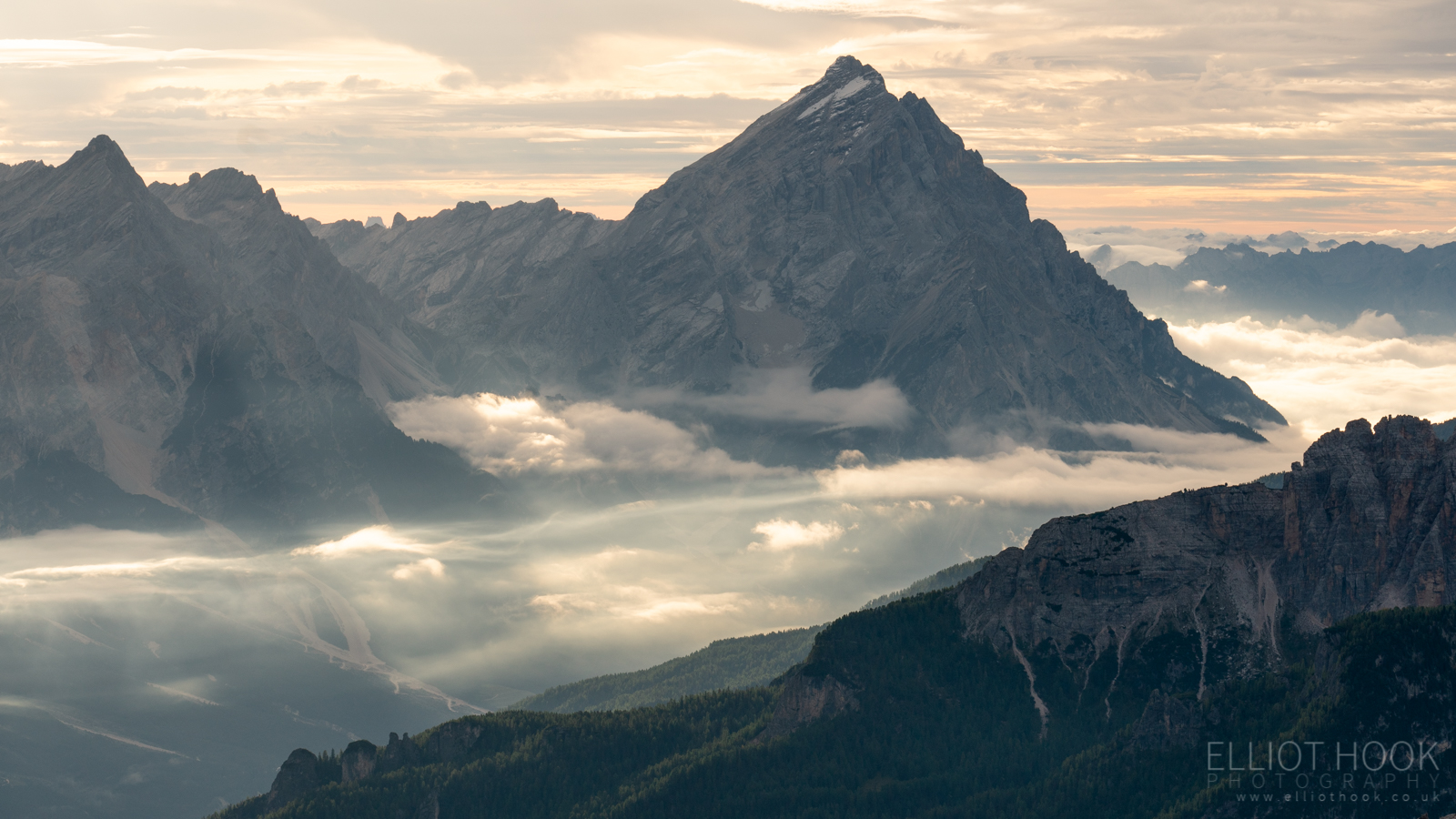 The final image I’m sharing was the last frame taken before we descended from the rifugio that morning.  It’s a telephoto image looking towards Monte Agner (the peak on the right hand third), band again is a shot down into a valley with layers of mountains to add depth. 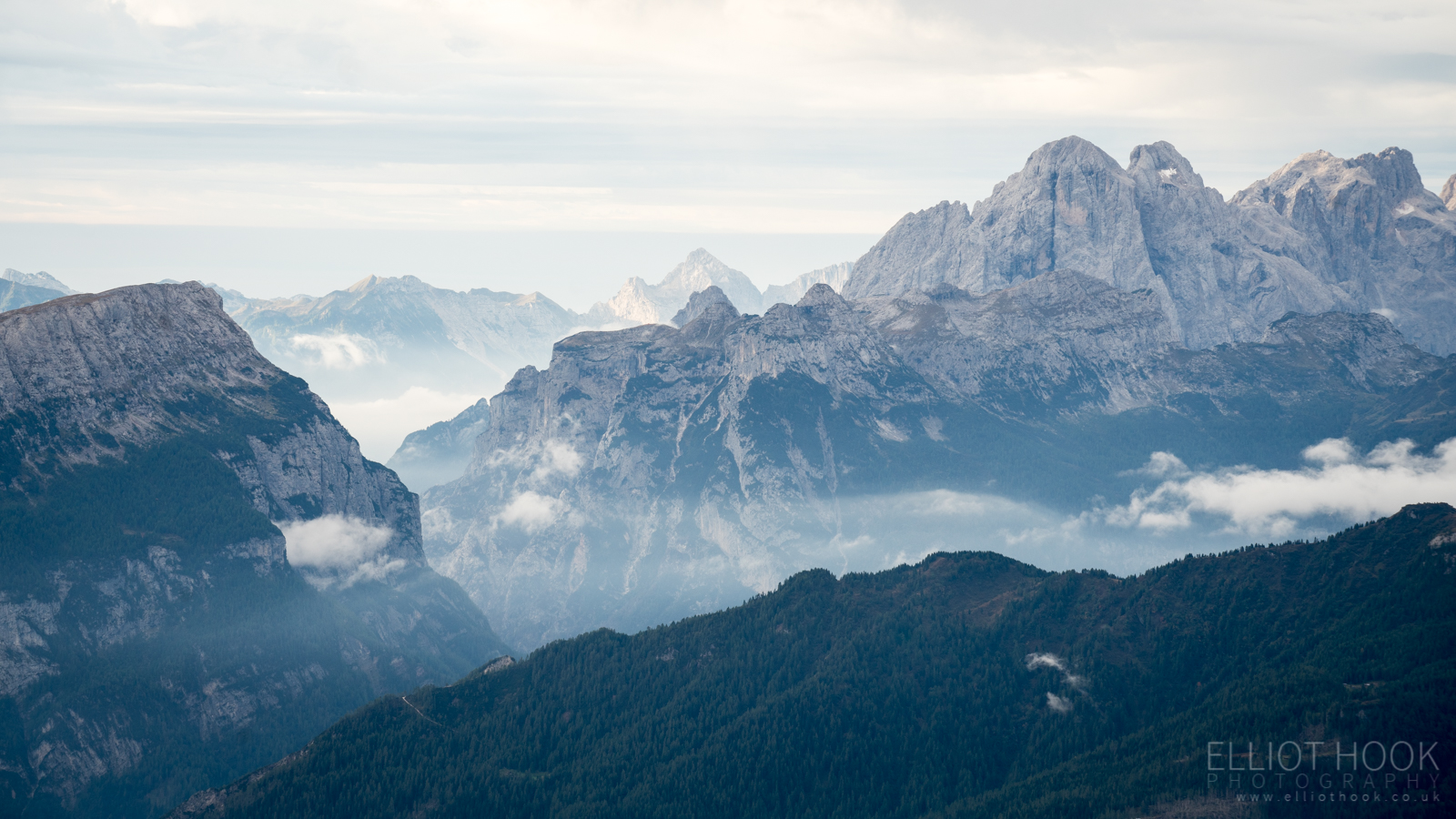 So, similarly to the last couple of locations, this didn’t feel like the most successful session at the time as we felt scuppered by the light yet again but, looking back, I came away with a handful of pleasing images from the time at Lagazuoi.